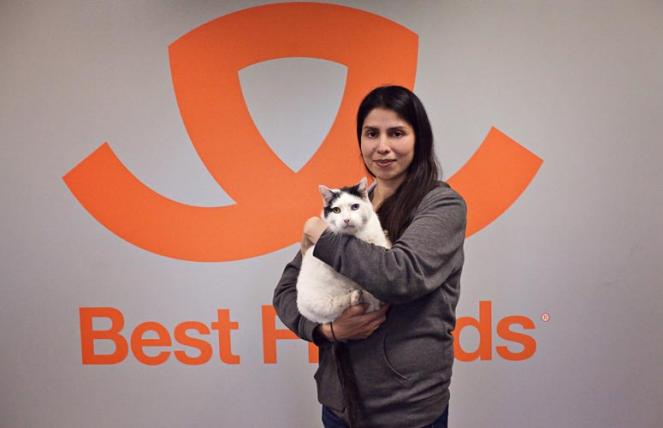 Rita Ball, manager at the Best Friends Pet Adoption and Spay/Neuter Center in Los Angeles, was at the city shelter looking at another cat, but Sparkles refused to be overlooked. At 13 years old, the sweet black-and-white cat with one hazel and one green eye had been surrendered by her family. Rita says, “She kept pawing at my head. I wasn’t there for her, but I fell in love with her.” Rita was smitten as the cat butted her head against the cage bars, purring like a lion.

In a tough spot

What Rita didn’t know at the time was that she had just met a much-loved cat who ended up at the shelter when her family felt they had no other choice. Sparkles lived in her family’s apartment until the landlord told them they couldn’t have pets — and that he’d be coming by daily to check. On a limited income, the family couldn’t afford to move. They couldn’t afford to be kicked out of their home, and when they couldn’t find anyone to take Sparkles, they brought her to the shelter in hopes that she’d find a new home.

The family’s daughter, Rosa, left home in 2004 to go into the Army, and now lives in Chicago. When she learned that her parents had brought Sparkles to the shelter, she was taken aback. “(Sparkles is) a family member. You wouldn’t give your little brother away to the shelter,” says Rosa. But, she adds, “I don’t think my parents’ awareness of shelters is very high.” Rosa was more than sad. She was determined to get Sparkles back — even though she lived halfway across the country.

On the day Rita met Sparkles at the shelter, she noted the cat’s information and vowed to keep tabs on her. As a senior cat in a shelter full of much younger cats and kittens arriving daily and in droves, Sparkles was likely at risk of being killed, even though she’s pretty and personable.

Soon after that visit, unable to stop thinking about her, Rita checked on Sparkles. She learned that Sparkles had come down with an upper respiratory infection — a common ailment affecting cats in shelters. Rita knew the cat’s days were numbered. She had an open space for a senior cat, so she acted quickly to take her in at the Best Friends adoption center.

Sparkles settled in, had her teeth cleaned, and was given medication to clear up her respiratory infection. Soon, she was feeling good again; all she needed was a home.

Meanwhile in Chicago, Rosa was trying to find Sparkles. After searching through hundreds of photos online, she saw a familiar furry face with one hazel and one green eye on Petfinder. That’s how she learned that Sparkles had been transferred to the Best Friends adoption center in Los Angeles.

Rosa called the center, explained what had happened, and then did what many wouldn’t. Though Rosa hadn’t lived with Sparkles for 10 years, she made plans to drive from Chicago to Los Angeles to get the family’s cat and bring her home to live with her.

When the two were reunited at the center, Rita says Sparkles seemed to remember Rosa, even after she’d been through so much. “She got right into the carrier like she knew she was going home,” Rita says. Now Sparkles is living happily in Chicago with Rosa. Sparkles is “the princess of the household.” At last, the family is together again.

Learn more about Best Friends in Los Angeles, including how we’re working to make the city no-kill by 2017.