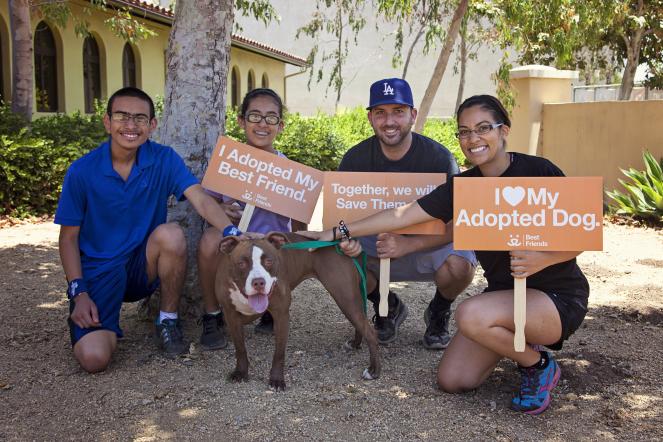 Los Angeles Closer to No-Kill
By: Michelle Sathe on August 26, 2014

The NKLA initiative is comprised of a coalition of 70+ local organizations, including LAAS.  “This came about because every member of the NKLA coalition, and most importantly the staff and volunteers of LA Animal Services, is prioritizing life-saving,” said Francis Battista, Best Friends Animal Society co-founder and the architect of NKLA. “I am in awe of the great work that is being done by every group and individual that is working to end shelter killing in L.A.”

Brenda Barnette, general manager of Los Angeles Animal Services, was equally thrilled with the news. “We did this with the hope, heart, energy and tremendous support of amazing groups and individuals who believe that we can Save Them All,” she said.

Best Friends is a national animal welfare organization devoted exclusively to ending the killing of shelter pets across America and as part of a public/private partnership with the City of Los Angeles, Best Friends operates a Pet Adoption & Spay/Neuter Center at a city-owned facility in Mission Hills. The organization also runs the NKLA Pet Adoption Center in West L.A., which includes pets for adoption from other coalition partners. Since January 2012, NKLA coalition partners have placed more than 73,000 dogs and cats into new homes through adoption and transport efforts, including more than 14,000 from the two Best Friends-operated centers.

“The unique partnership with Best Friends Animal Society is not only saving the City of L.A. well over $3 million dollars by operating the former Northeast Valley Shelter, they are saving the lives of thousands of companion animals, as well as providing free and low-cost spay/neuter surgeries for community pets and providing generous financial and technical support to NKLA coalition partners,” Barnette said.

Found Animals Foundation has been a strong NKLA coalition partner since its inception. “The historic low number of killings at Los Angeles Animal Services is the result of years and years of hard work. Everyone at Found Animals is excited to be a part of NKLA and looks forward to the day when the number of shelter killings for adoptable dogs or cats in Los Angeles, and across the country, is down to zero,” said Aimee Gilbreath, executive director of Found Animals Foundation.

Since its founding, Best Friends has helped reduce the number of animals killed in America’s shelters from 17 million per year to 4 million. “This is about a national movement to Save Them All that is capturing the imagination of the public in Los Angeles and across the country,” Battista said.