Strut Your Mutt Returns to Los Angeles on September 6 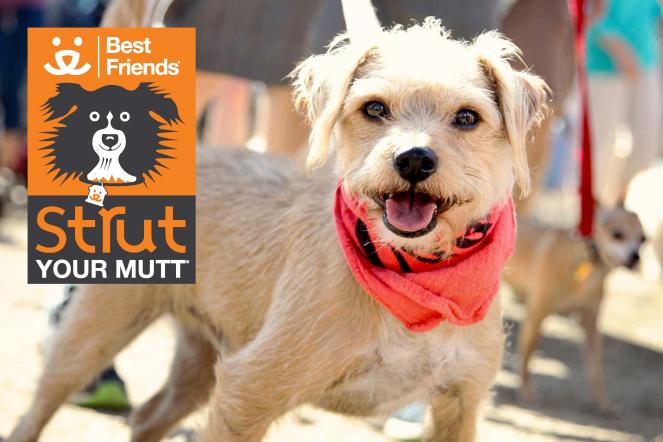 It was 1995 when Best Friends Animal Society® started a small dog walk event in its home state of Utah. Back then, even the most optimistic animal welfare enthusiast could not have imagined the community event growing to a multi-million dollar fundraiser benefiting hundreds of shelters and rescue groups around the country.

Nineteen years later, Best Friends -- now the flagship organization for the no-kill movement in the United States --has taken Strut Your Mutt® beyond its Salt Lake City birthplace to 12 different cities* for events  in 2014 between August and September.

The Los Angeles Strut Your Mutt takes place on September 6 at Will Rogers State Park in Pacific Palisades for an early-evening twilight walk and fun run for participants and their dogs, followed by an outdoor festival with activities for humans and canines alike.

Funds raised through Strut Your Mutt are utilized locally to fund adoption programs, spay/neuter services and other life-saving programs, which dramatically impact the number of pets entering and leaving the shelters.  Last year, nearly $1.7 million benefitted approximately 230 animal welfare groups. The 2014 goal is to raise a grand total of $2 million.

“This year Best Friends is celebrating its 30th anniversary. When we started, the conventional wisdom was that killing homeless pets was an unfortunate but unavoidable fact of life. Every day some 45,000 animals were being killed in our nation’s shelters,” said Gregory Castle, Best Friends’ chief executive officer. “Best Friends was one of the very first organizations to challenge the idea that killing animals in shelters was acceptable. Because of a lot of hard work through the years by Best Friends and other organizations, the daily number has dropped to 9,000, but we are committed to reducing that number to zero.”

What makes Strut Your Mutt special in the world of non-profit organizations is that Best Friends Animal Society provides the infrastructure for the events, but allows local organizations to benefit from funds raised.  For many small, grassroots animal welfare organizations, proceeds from Strut Your Mutt provide an important part of the groups’ annual operating funds.

“Strut Your Mutt is a celebratory way for the shelters and groups to come together and invite the public to join us in our call to action: Save Them All,” Castle said.

Best Friends Animal Society is the only national animal welfare organization focused exclusively on ending the killing of dogs and cats in America's shelters. An authority and leader in the no-kill movement since its founding in 1984, Best Friends runs the nation's largest no-kill sanctuary for companion animals, as well as life-saving programs in partnership with rescue groups and shelters across the country. Since its founding, Best Friends has helped reduce the number of animals killed in shelters from 17 million per year to 4 million. Best Friends has the knowledge, technical expertise and on-the-ground network to end the killing and Save Them All®.