16 Reasons to Adopt a Game Day Pal This March Madness! 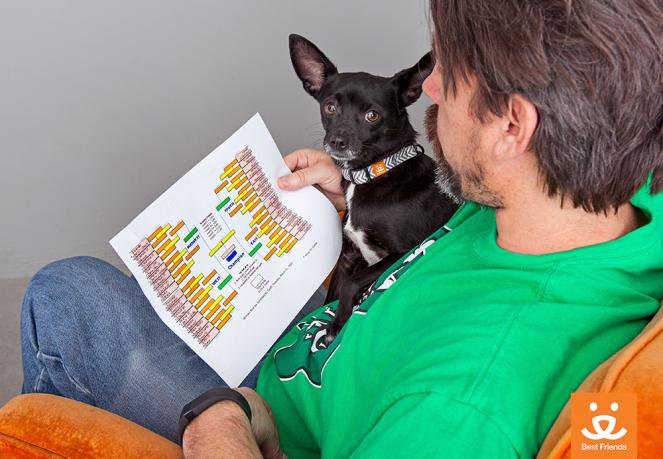 March is upon us, and that can mean only one thing to college basketball fans… let the madness begin!

According to the NCAA, an estimated 181 million people tune in to March Madness. And a 2014 MSN survey indicated that as many as 50 million people participate in office pools. That adds up to a big investment in TV time, workplace wagering, snack snarfing and beer buying.

What if even a fraction of those folks decided to put a little of that money and energy into adopting a basketball buddy during the tournament? Best Friends Animal Society points out that thousands of lives would be saved, and a lot of furry fans would score new people with whom they’d share the thrill of victory and the agony of defeat.

Adopters can choose from hundreds of dogs and cats of all breeds and sizes, all of which originated from Los Angeles Animal Services. Every pet is spayed or neutered, micro-chipped, vaccinated and ready to go home the same day. Adoption kits include a personalized pet ID tag, a bag of food, and 1 month of pet insurance.

Still not sure this is the best time to adopt a dog or cat? Best Friends offers Sweet 16 reasons that a new adopted pet is the perfect companion for March Madness:

1. A pet prefers the way your "lucky t-shirt" smells when you haven't washed it for a month.

2. A pet will never win the office pool.

3. A pet always thinks you're Division I, no matter what.

4. When you say "seeds," a pet knows you're talking tournament, not gardening.

5. A pet always goes for the under-dog.

6. A pet won't hog the remote or switch the channel to The Bachelor.

7. A pet won't take the last beer out of your fridge.

8. A pet won't order three large pizzas with everything and then tell you he forgot his wallet when they’re delivered.

9. A pet won't bore you with his "bracketology."

10. A pet thinks he looks best in your team's colors.

11. A pet thinks your rival school sucks too.

14. A pet is cool if you admire the cheerleaders.

15. A pet picks based on the mascot too.

16. A pet won't judge if you cry when your team is eliminated.

So don’t wait for the Elite Eight or the Final Four to find your new four-legged friend. Check out http://la.bestfriends.org or visit the Best Friends Pet Adoption Center, which is open daily from noon to 8 p.m.

About Best Friends Animal Society:
Best Friends Animal Society is the only national animal welfare organization focused exclusively on ending the killing of dogs and cats in America's shelters. A leader in the no-kill movement, Best Friends runs the nation's largest no-kill sanctuary for companion animals, as well as lifesaving programs in collaboration with its nationwide network of members and partners working to Save Them All®. In Los Angeles, Best Friends leads the No-Kill Los Angeles (NKLA) initiative, which is focused on ending the killing of dogs and cats in city shelters by 2017, and operates two centers, the NKLA Pet Adoption Center in West L.A. and the Best Friends Pet Adoption and Spay/Neuter Center in Mission Hills. Since its founding in 1984, Best Friends has helped reduce the number of animals killed in American shelters from 17 million per year to about 4 million.