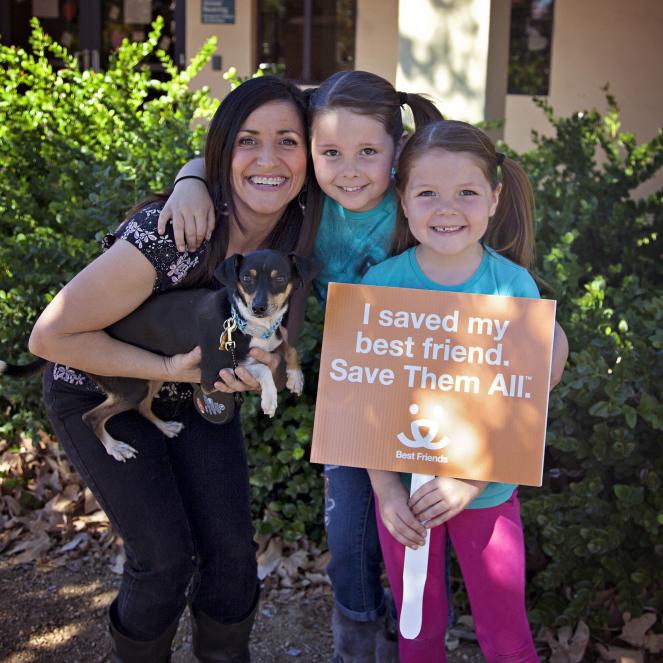 LAAS Statistics Report 56% Decrease in Killings in 3 Years
By: Michelle Sathe on April 08, 2015

In 2012, when Best Friends launched NKLA in conjunction with LAAS and a coalition of local animal welfare organizations, the number of LAAS dogs and cats being killed was more than 18,000. In 2014, that number dropped to approximately 7,900, a decrease of 56 percent in just three years.

“This is exciting progress for everyone in the NKLA coalition, as we strive to transform LA into the nation’s largest no-kill city and create a model for the rest of the country to emulate,” said Francis Battista, co-founder of Best Friends Animal Society. “However, there is still a lot to work in order to get that killed number down to zero.”

As part of a public/private partnership with the City of Los Angeles, Best Friends Animal Society, the only national animal welfare organization focused on ending the killing of shelter pets, operates a Pet Adoption & Spay/Neuter Center at a city-owned facility in Mission Hills at its own expense. Best Friends also runs the NKLA Pet Adoption Center in West L.A., which includes pets for adoption from coalition partners. In 2014, both of the Best Friends-operated adoption centers found homes 4,902 LAAS dogs and cats.

“This innovative relationship has allowed more dogs and cats entering our shelters to leave alive into homes of their own, or through transfer to the Best Friends shelter or smaller rescue groups,” said Brenda Barnette, general manager of LAAS. “It really is cause for animal lovers in this city to celebrate and, hopefully, provides the motivation for everyone to join the next leg of our journey to No Kill Los Angeles.”

The overall save rate for LAAS is currently 73.4 percent. Dogs have reached an 84.7 percent save rate, which is closing in on the 90 percent no-kill threshold. However, for cats, the save rate is just 56.7 percent, highlighting the need to focus attentions here.

As such, Best Friends is continuing to provide large-scale spay/neuter grants for cat-focused NKLA coalition members such as Stray Cat Alliance. “Spaying and neutering is huge, because it means fewer cats will be born on the streets, and fewer cats will end up in the shelter,” said Christi Metropole, founder of Stray Cat Alliance. “Also, cats who will never hit the shelter, their lives are improved greatly by being spayed and neutered.”

Additionally, Best Friends Animal Society - Los Angeles took in more than 2,000 neonatal kittens and dozens of nursing mothers from city shelters through its onsite kitten nursery in Mission Hills last year. More than 60 percent of the cats killed at LAAS are neonatal kittens.

“Shelters just don’t have the resources to help this fragile population, which is why we made it a priority. Once you get kittens to the size and age to be spayed or neutered, they are highly adoptable,” Battista said.

Best Friends encourages the community to adopt, foster, make sure pets are spayed or neutered, volunteer, or donate. Visit http://la.bestfriends.org or www.nkla.org for more information.

Best Friends Animal Society is the only national animal welfare organization focused exclusively on ending the killing of dogs and cats in America's shelters. A leader in the no-kill movement, Best Friends runs the nation's largest no-kill sanctuary for companion animals, as well as lifesaving programs in collaboration with its nationwide network of members and partners working to Save Them All®. In Los Angeles, Best Friends leads the No-Kill Los Angeles (NKLA) initiative, which is focused on ending the killing of dogs and cats in city shelters by 2017, and operates two centers, the NKLA Pet Adoption Center in West L.A. and the Best Friends Pet Adoption and Spay/Neuter Center in Mission Hills. Since its founding in 1984, Best Friends has helped reduce the number of animals killed in American shelters from 17 million per year to about 4 million.