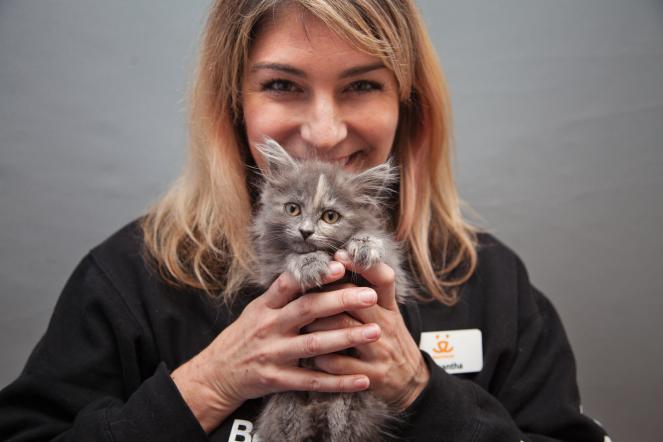 Cats in Los Angeles get the help they need so they can find homes
By: Kelli Harmon on June 19, 2015

Kelly Garrett, a pretty, long-haired gray kitten with an orange stripe down her forehead, was named after one of the original “Charlie’s Angels,” but she and her litter mates weren’t exactly angelic when they landed at a Los Angeles Animal Services shelter.

In fact, they were quite feisty, and that fact could have been the end for them all. Because when shelters everywhere are inundated with cats and kittens all summer long (during kitten season), even friendly felines are at risk of being killed. But the “Charlie’s Angels” kittens were in luck. Best Friends–Los Angeles has a team of people who specialize in helping the city’s less angelic homeless kitties.

Most cats at the Best Friends Pet Adoption and Spay/Neuter Center in Los Angeles are sweet and friendly when they arrive from Los Angeles city shelters (where all pets at the center come from). Those cats typically find homes quickly, but others need more help to get there. That’s where Samantha Bell, cat behavior and enrichment lead at the adoption center, comes in. She heads up a team of volunteers who give their time specifically to help cats who are afraid of people, upset by people and everything in between. With time, attention and care, hisses turn to purrs. And a cat who purrs will be adopted sooner than one who hisses.

Kelly Garrett and her litter mates came to the Best Friends adoption center so they, too, could get the help they’d need to find homes. Samantha says, “They huddled in the corner of their enclosure at first, and when you approached them there was a chorus of growls and hissing and spitting.” But that didn’t last long, in part thanks to the cat behavior team’s secret weapon: the cats-in-need worksheet.

The concept is simple but effective. As different people work with cats on the behavior list, they take meticulous notes about what they find that each cat likes and doesn’t like, and what that cat needs to make progress. As time passes, the team ends up with a packet of notes, observations and instructions that other volunteers can look at and know exactly what to do and what not to do with each cat.

At any given time, about 20 cats are getting specialized help from the team. The cats probably wonder how these people seem to know their secrets. It’s all because of the packet. Samantha says, “That packet is the reason a lot of these cats are taking steps forward in their socialization. It is a self-guided tour of each cat and exactly what they need.”

Samantha’s notes for Kelly Garrett began like this: “Is afraid of hands coming toward her. Put wet food on your fingers and offer that to her to help desensitize her to hands. Hold her close to you until you feel her body relax, pet her head, hug her, let her look at you so she becomes comfortable with people. She has not purred yet but keep trying!"

Volunteers dutifully followed the instructions each day, and kept notes on their progress with the long-haired kitten and her brother and sisters. After a few days, the notes began to include comments like “hissing less.” Then, “stopped spitting.” And soon after, “Her eyes closed and she relaxed.” And finally — the big one: “She purred!”

The once-terrified Kelly Garrett is now ready for love and her new home. It’s a safe bet that she’ll be adopted soon after she’s spayed, just like two of her “Charlie’s Angels” litter mates were. Because now when people meet her, they see nothing but a perfect little angel.