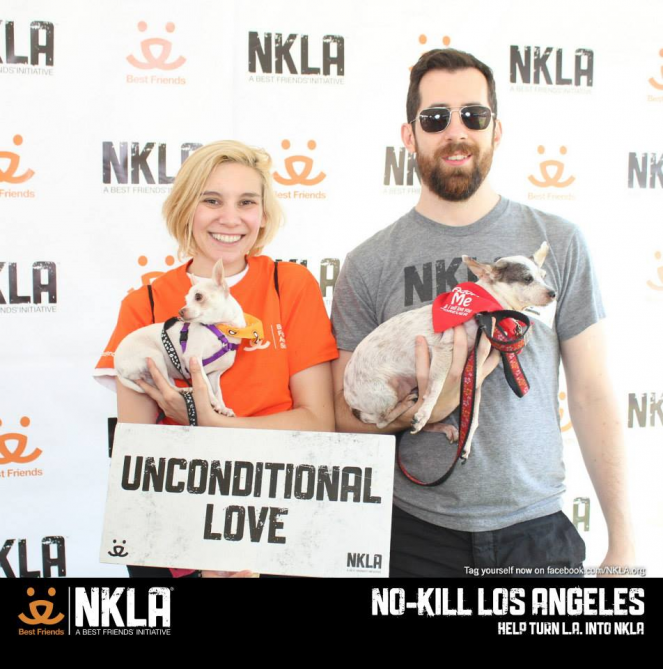 Why do you choose to volunteer with Best Friends LA?

I live near NKLA and had seen the billboards in the area when it opened in 2014.  I love dogs, so I was curious about volunteering but was worried it'd be depressing to see so many animals without homes. Several months later, I was getting my car washed near the center and a volunteer, Walter Berk, was taking a dog on a walk while wearing an NKLA shirt. We struck up a conversation and Walter convinced me to come check it out, and I'm so happy I did.  The staff is great, the facility is beautiful, and the dogs awesome, just like any other dogs--they just happen not to have forever homes. In the meantime, we get to hang out with them and help them find homes, and when they do, it's the best feeling in the world.  Now I try to make it to NKLA at least a couple times a week.  I also recruited my girlfriend Katie, so on weekends we'll volunteer together.

How long have you been a Best Friends LA volunteer?

I started volunteering at NKLA in Fall 2014.
What type of fun stuff do you do when you're not volunteering?
I work as a test prep instructor for graduate entrance exams (GMAT/GRE). In my spare time I play music--piano and vocals.
Do you have a favorite story to share about an experience volunteering with Best Friends LA?
I especially like working with 'gray paw' dogs, those who need some extra attention and training. Last year there was one dog named Baldwin, a pitbull mix who has been blind since birth and is one of the friendliest, happiest dogs I've ever met. Since he's blind, on walks I had to be his seeing-eye human, which was challenging but a ton of fun. We would even run together for short spurts--he trusted me enough to know that I wouldn't let him trip on or bump into anything.

Another favorite was Frederick, a big German Shepherd.  He'd been at NKLA for a while, probably because he has a loud bark and was pretty intimidating. He was actually really cool once you got to know him, and I started walking him every time I was at NKLA. After a few weeks, we were coming back from a walk, and when I put him back in his kennel, he looked up at me and rolled over for a belly rub. He'd never done that before with me, so that was a big deal. He got adopted not long after, and I was simultaneously really happy for him and bummed that we wouldn't get to hang out anymore
Bonus: As a gray paw volunteer, I'm allowed to walk two little dogs together if they're kennel mates. Efficient AND adorable.

Do you have any pets?
I don't have any pets at the moment, so I get my dog fix at NKLA!
What others are saying about Ryan:
"We're so happy to have Ryan part of our NKLA family. He's always dedicated to giving our dogs lots of love and attention. Thank you so much for all of your support, Ryan!" - Erika, Volunteer Coordinator