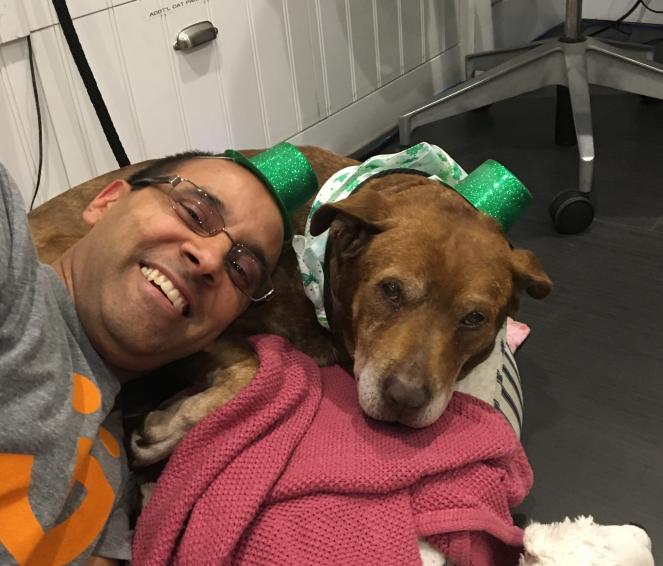 Robert helps out across all teams at our adoption centers has been instrumental in developing support systems for new volunteers.
March 27, 2018

What BFLA programs/events/volunteer roles do you find yourself participating in?

I volunteer with the dog team, cat team, adoptions and special events.

Why do you choose to volunteer with Best Friends LA?

I volunteered at the Montreal SPCA for 4 years and helped out a few smaller organizations with their mobile adoptions after moving to LA, but NKLA has provided the most enjoyable and satisfying experience by a very wide margin.  I love learning and appreciate the number of different classes that are offered for free.  I think that I have taken almost all of Janelle's classes and signed up for the two newest ones as soon as I saw them posted earlier this month.  I also feel that the staff does a fantastic job of showing their appreciation to the volunteers and their love for the animals.

How long have you been a BFLA/NKLA volunteer?

About 3 and half years but I have become increasingly involved every year and my level of enjoyment and gratification have also grown correspondingly.

What do you do when you're not volunteering (career/extracurricular activities)?

I play a variety of sports and spend too much time watching sports on TV.

Do you have a favorite story to share about an experience volunteering with Best Friends LA?

There are a lot to choose from but I can only think of one where I applied what I had learned during a class that directly led to an animal being adopted.  I have a lot more experience with dogs than cats so I learned a lot from Samantha's Cat Behavior Class which I took in December 2016.  This is a portion of the thank you message that I sent to her in early January this year, 13 months after taking her class.  I try and practice what I learn whenever possible but am still surprised that they worked so perfectly in this case:

"I was volunteering at the front desk on Sunday and since it was a little slow at first I went up to the cat rooms to make sure all of the cats had received some form of interaction.  According to the white boards only one cat, Oliver, hadn't received any attention.  He was in one of the top condos and lying on the top shelf.  He didn't react when I opened his door so I slowly blinked at him for 1-2 minutes until he responded.  About another minute later he got down from the top shelf and moved to the front of his condo so I provided my scent to him and then slowly began to pet him on his whiskers and forehead for a few minutes.  I then played with a wand toy while he was inside his condo because he still seemed a little cautious to me.  A few hours later, I was entering the same room to showcase a different cat to a customer when another volunteer was closing Oliver's door.  She was with a couple who was interested in Oliver but decided to look at other cats since he stayed on his top shelf and showed no desire to interact with them.  I told them my recent experience with Oliver and decided to "exchange" customers with the other volunteer.  I then repeated the same steps with Oliver and had the also couple repeat the same interactions individually with him.  I then put him on the ground and played with a wand toy and then gave the wand toy to the customer.  They decided to adopt him a few minutes later.  I am fairly certain that Oliver wouldn't have been adopted if I hadn't taken your class (Sam's class) and gotten lucky due to my fortuitous timing in entering the room."

Do you have any pets? Tell us about them!

I don't currently have any pets at home but recently signed up to foster kittens to help LA get to a 90% save rate this year so I should have some company at home soon.

What others are saying about Robert:

Robert is amazing! Robert donates time to almost every center volunteer team including helping us facilitate first day training's for new volunteers! He is one of the most supportive "veteran" volunteer of new volunteers that we have at our facility. He is always looking to help new people feel comfortable as they begin their volunteer journey with us. He has also been instrumental in helping to develop support systems for new volunteers and help with numerous program advancements this past year. Every single volunteer and staff person loves working with Robert and is beyond grateful for all that he does! Thank you Robert for everything! We appreciate you and your awesome hard work! - Justin (NKLA Volunteer Coordinator)