Paralyzed kitten gets a custom set of wheels and a family 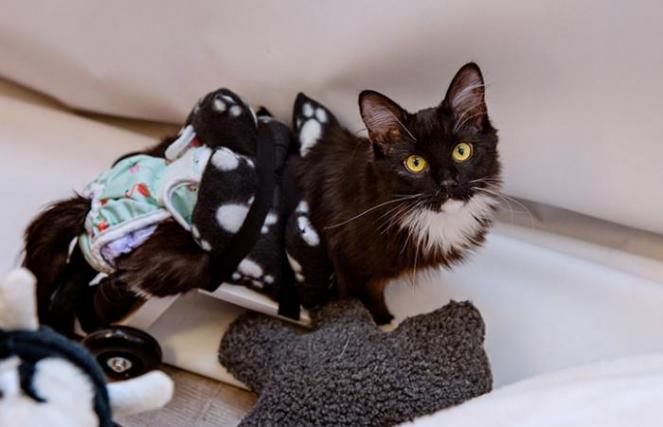 Hot Wheels arrived hurting, but left with the promise of a great life with a family eager to take in a kitten with special needs
By: Diane Barber on April 23, 2021

They call her Hot Wheels, and sometimes a name just fits. In the case of a partially paralyzed but ever-so-spunky kitten from Los Angeles, the name she was given shortly after arriving at Best Friends proved to be not only wildly appropriate but remarkably prophetic. It was just meant to be.

Kylie Melville, manager of lifesaving outcomes at Best Friends in Los Angeles, was on-site when three kittens –– two healthy boys and one underweight, injured girl –– arrived at the lifesaving center. The healthy-looking boys were moved into a comfortable area to await their exams, while the tiny girl was immediately taken to the clinic for medical evaluation.

The little black-and-white kitten had extensive lacerations and open wounds on her lower body, and her back legs were completely immobile. Once she was on the exam table, though, the tiny kitten gave the medical team a glimpse of what a fierce and determined girl she was, as she used her front legs to pull herself from one end of the table to the other with the speed of an Olympic sprinter.

Kylie and veterinary technician Erin Karol spent much of that afternoon observing the new arrival and discussing a course of action. Although her back legs were paralyzed and her prognosis far from certain, the tiny patient was not at all deterred.

“I was watching her zoom around the exam table with just her front legs, and I thought it was interesting how fast she was,” says Kylie. “I figured that if she survived, she was going to need some wheels to help her get around.” That’s when she had an idea about what to name her. “She was so little, just like those tiny cars,” she says. To Kylie it was obvious: She would be called Hot Wheels.

Hot Wheels’ first couple of weeks in the care of the Best Friends medical team were largely about recovery and observation. The team cleaned and bandaged her wounds and administered a regimen of antibiotics. Veterinarian Dr. Anna Sarfaty concluded that Hot Wheels’ paralysis was caused by a congenital malformation that caused her back legs to turn inward, leaving her without the muscle control to move them.

The leg wounds were the result of urine scald and the inevitable beating her legs took as they scraped the ground each time she moved about. The wounds needed time to heal, and the medical team needed time to chart a strategy that would assure the future health and well-being of their little patient. 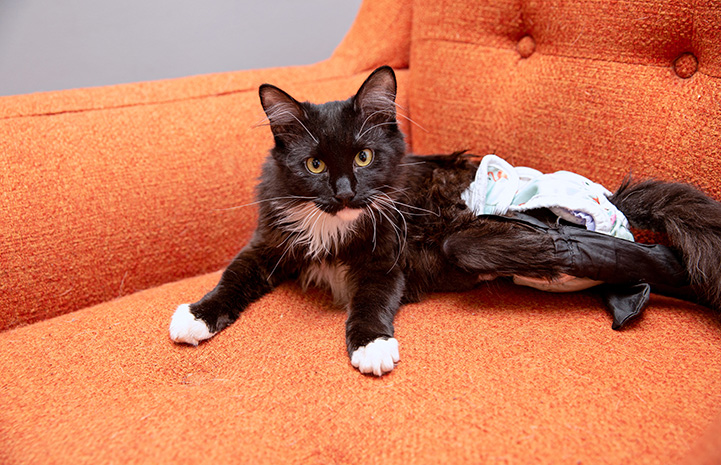 By early December, things were looking good for Hot Wheels’ two brothers, Big Wheel and Little Tike. They passed their intake exams with flying colors and within a week of their arrival they were moved into a foster home together; however, the road for Hot Wheels was much rockier. She quit eating, had bouts of vomiting and was increasingly lethargic. A test confirmed what the medical team feared: She had panleukopenia. Following the diagnosis, she was placed in quarantine and underwent treatment to fight off the deadly virus.

Once again, Hot Wheels’ fighting spirit kicked in and within two weeks she was healthy again. It was then that the foster team, in consultation with the medical team, developed a plan: She would be placed in foster care with Ranko Fukuda, a seasoned volunteer with a long history of fostering Best Friends animals with acute medical needs. Learning how Hot Wheels adapted in a home environment would provide the adoption team with valuable information to help find a home that would meet the special kitty’s needs.

[Injured roadrunner gets back on his feet at Best Friends]

Ranko knew that fostering Hot Wheels would be a commitment. Although the determined kitten had learned to move around just fine in spite of her paralysis, she was unable to fully groom herself. In order to avoid future urine scald, Ranko would have to bathe her three to four times a day, plus keep a close eye on her legs since the wounds were still healing. She was ready though, and so was Hot Wheels.

Hot Wheels quickly settled into her new environment and scooted around faster than Ranko could keep up. Ranko knitted a pair of leg warmers to protect her legs and fashioned tiny diapers out of cloth and Poise pads. A bathing schedule was established and followed. Meanwhile, Hot Wheels played with the resident dogs and explored every inch of the house with the gusto of any six-month-old kitten. Nothing could slow her down. 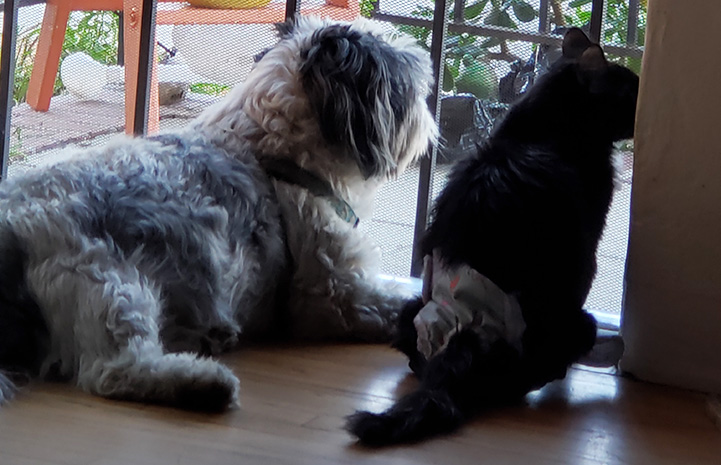 Hot Wheels gets a new ride

Before long, Ranko was posting videos of her playful foster on Instagram ― diaper and all. One of those videos caught the attention of Derek Kazahaya, a friend, entrepreneur and healthcare consultant who just happened to own a 3D printer and was eager to put it to work for a good cause. After seeing a video of the cute kitten, he made contact with Ranko and offered to design and fabricate a custom set of wheels that would allow her to navigate the physical world without dragging her legs on the ground.

Although Derek had no experience designing such a device, he jumped right into the project. With some online research, some creative thinking, a $20 investment in materials and five hours of fabrication time, he and his handy printer cranked out the device. When the day of the test drive arrived, Hot Wheels was strapped into the custom kitty chariot and within seconds, she was off to the races.

Over subsequent weeks, Derek tinkered with the design. The second version provided more support around the chest, thus alleviating pressure on the growing kitty’s spine. It was adjustable so that as Hot Wheels got bigger, the frame of her custom wheels could be expanded to accommodate her larger size.

Things were moving fast now for the little speed demon. Thanks to Kylie, the injured kitten had a new identity. Thanks to the Best Friends medical team, Hot Wheels regained her health. Thanks to Ranko, she embraced her inner kitten for the first time in her life. And thanks to Derek, she had a cool new way to get around. Now, all she needed was a permanent home to call her own. 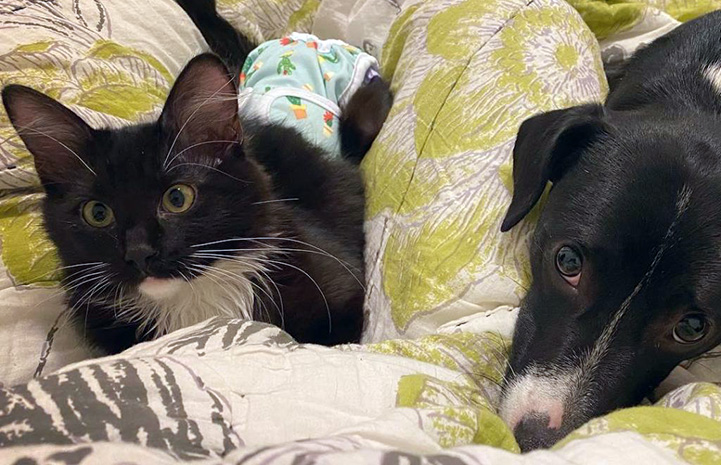 On the road to a new life

Hot Wheels had become somewhat of a celebrity among the Best Friends staff and when she made an appearance on a Los Angeles weekly television segment showcasing adoptable animals, her fame reached new heights. That morning, Jackie Latronica tuned into the program as she always does. She watched and listened to Hot Wheels’ story, learning about the kitten’s need for a special kind of care, baths and attention, additional mental stimulation and (most of all) an attentive guardian willing and able to go the extra mile to ensure that she stayed healthy and happy.

Although Jackie wasn’t in the market for a cat when she tuned into the show, she saw Hot Wheels and instantly knew she was looking at her future cat companion. “I saw her and I thought: ‘I think I love this cat. I think I want to adopt this cat.’ I knew she was the one.” recalls Jackie.

So, she contacted Best Friends, filled out an application, arranged a virtual meet-and-greet and made it official. Within three days of the TV appearance, Hot Wheels moved into her new home.

In the days since, Jackie, Hot Wheels and her new brother (a dog named Maverick who also has special needs), have been living it up together. “She really is the life of the party,” says Jackie. “She’s an active, happy kitten who doesn’t know that there are any problems whatsoever. Others might see her as having a disability, but she doesn’t see herself that way. She’s a fun-loving kitten and she just enjoys life. And she’s so independent. She’s absolutely fearless.”

In a lot of ways, Hot Wheels is the perfect representation of Best Friends’ work. She arrived injured and paralyzed, and from that moment on she had a team of people doing everything in their power to set her up for a good life. “Hot Wheels is a great example of why we don’t give up,” says Dr. Anna. “From the second she arrived, we were committed to the idea that we would find a place for her.”

Because of that commitment, Hot Wheels received the gift of a new life with a family that loves her. To quote Jackie, her proud mom: “She’s a miracle. She’s an absolute miracle. We really are blessed to have her.” It’s the ultimate happy ending. 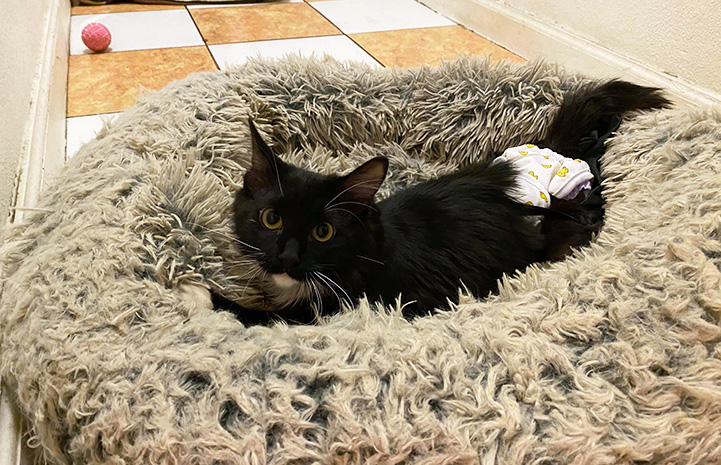 Create a happy ending of your own

If you’re ready to provide a happy ending for a homeless pet, find the one you’ve always dreamed of at a shelter near you.