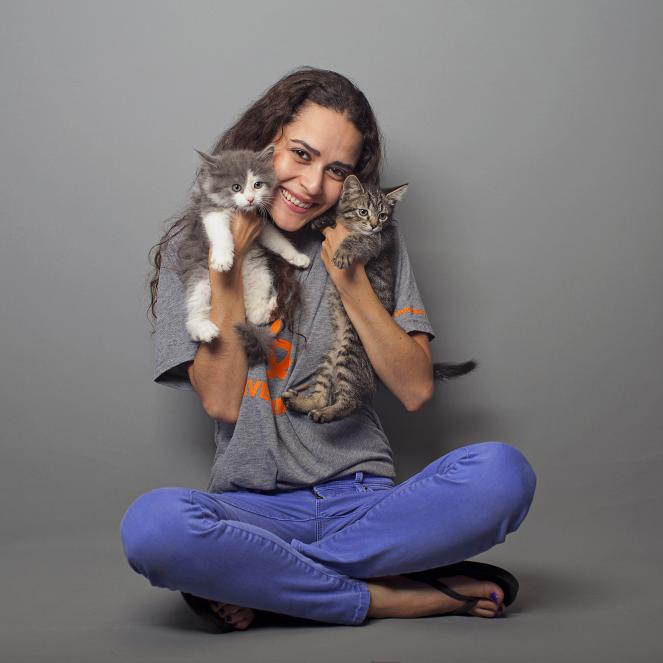 It may be tough to make friends at Carlton High, but Stephanie Nogueras, who plays Natalie Pierce on ABC Family’s “Switched at Birth,” was instantly popular with the homeless dogs and cats at Best Friends Pet Adoption & Spay/Neuter Center in Mission Hills, California. “Switched at Birth” returns to ABC Family on Monday, June 16, yet Nogueras still found time in her busy schedule to volunteer recently at the center, which is operated by Best Friends Animal Society. While at the center, Nogueras especially bonded with the newborn tabby kittens in the kitten nursery, which provides round-the clock care for fragile neonatal kittens from Los Angeles city shelters.

An avid animal lover who grew up on a farm in South New Jersey, Nogueras had a big smile on her face as she held a kitten in her arms. “They remind me of my cat Fluffy Angel, who’s been with me since I was eight years old,” Nogueras said. “I miss being around all of my family’s animals. That’s one of the reasons I decided to volunteer with Best Friends Animal Society.” Nogueras is a fan of Best Friends’ Save Them All call to action, which focuses on ending the killing of dogs and cats in America’s shelters. “People need to wake up and realize that animals have feelings and emotions just like we do. That’s why I’m supporting this cause, because all pets deserve respect, love and to live a good, long life,” she said. She also encourages fans of “Switched at Birth” to help animals in need. Best Friends’ offers 30 ways for pet lovers to Save Them All, including adoption, spaying and neutering of current pets, volunteering and networking pets in need via social media. “Even a small act of kindness can make a huge difference in animals’ lives. In return, you’ll receive warm feelings of joy, love and happiness in your heart,” Nogueras said. About Best Friends Animal Society® Best Friends Animal Society is a national animal welfare organization focused on ending the killing of dogs and cats in America's shelters. An authority and leader in the no-kill movement, Best Friends runs the nation's largest no-kill sanctuary for companion animals, as well as lifesaving programs in partnership with rescue groups and shelters across the country. Since its founding in 1984, Best Friends has helped reduce the number of animals killed in shelters nationwide from 17 million per year to about 4 million. Best Friends has the knowledge, technical expertise and on-the-ground network to end the killing and Save Them All®. To become a fan of Best Friends Animal Society on Facebook go to:http://www.facebook.com/bestfriendsanimalsociety Follow Best Friends on Twitter: http://twitter.com/bestfriends