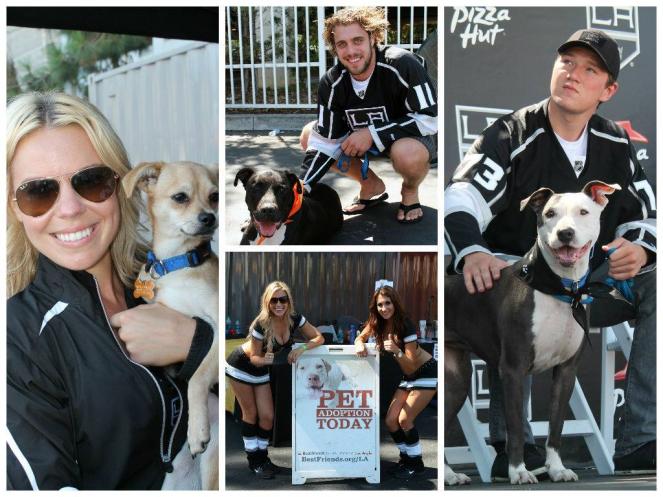 The Los Angeles Kings invited Best Friends Animal Society, a national animal welfare organization dedicated to ending the killing of shelter pets, to be a part of its annual Hockey Fest on Sept.14. The event kicks off the 2014-15 hockey season and offered opportunities for the public to meet some of their favorite players.

The event was the second time in 2014 the LA Kings collaborated with Best Friends, in March the team hosted a mobile adoption at the Toyota Center which resulted in several adoptions.

“I’m a dog owner myself, so seeing pets suffer just breaks my heart,” said Anze Kopitar, center and Stanley Cup MVP as he petted Charles, a six year old adoptable black pit bull mix available for adoption from Best Friends in Mission Hills. “Any time I can help with dogs, I’m up for it.”

Tyler Toffoli took to the stage later in the festival with Shika, a four year old gray and white American Staffordshire Terrier mix.“I think this is a good way to help dogs find a home,” Toffoli said. “I don’t have a dog at the moment, but when we’re ready, I will definitely adopt.”

“The LA Kings have such huge hearts and we so appreciate their help in spreading the word on how pet lovers can help Save Them All, especially in promoting adoption,” said Marc Peralta, executive director of Best Friends Animal Society – Los Angeles. “Since we pull all of our pets from Los Angeles Animal Services, every time you adopt from us, you’re really saving two lives – the one you take home and the one who will take its place at our adoption center.”

Best Friends Animal Society is the only national animal welfare organization focused exclusively on ending the killing of approximately 9,000 dogs and cats in America's shelters each day. Best Friends is working collaboratively in Los Angeles with animal rescue groups, city shelters and passionate individuals who are all dedicated to the mission of making Los Angeles a no-kill city. As part of this mission, Best Friends hosts adoption and fundraising events such as Strut Your Mutt, and the NKLA Adoption Weekends, runs both the Best Friends Pet Adoption & Spay Neuter Center in Mission Hills and the NKLA Pet Adoption Center in West Los Angeles, and leads the NKLA initiative.