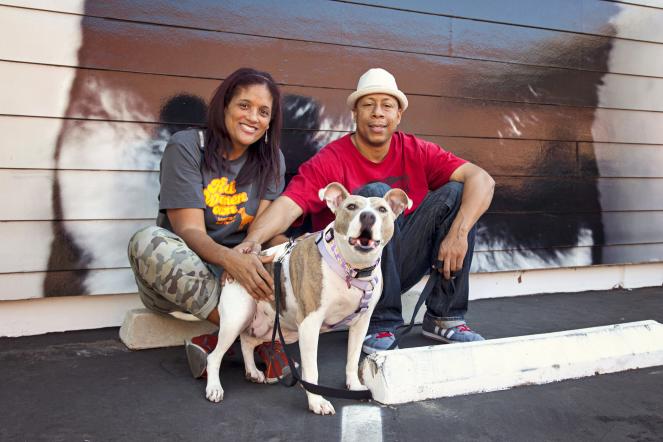 It was a day of celebration at the NKLA Pet Adoption Center in West Los Angeles on Sunday, Oct. 19. Since opening its doors last year, the Center, operated by Best Friends Animal Society as part of its NKLA (No Kill Los Angeles) initiative, has adopted out more than 1,800 dogs and cats.

The Center houses approximately 100 adoptable dogs and cats, most of which are pulled from Los Angeles Animal Services shelters. Fifty percent of the kennel space is allocated to NKLA coalition partners such as Labs and Friends, Karma Rescue, Kitty Bungalow and Angel City Pit Bulls, providing a premier retail location to house their adoptable pets. Inside the Center, multi-media technologies further enhance the pet adoption experience. Touch-screen kiosks offer potential adopters the ability to view photos, watch videos, and learn details about each pet’s personality with a simple swipe. The main lobby touch screens also include the ability to learn about the NKLA initiative and how animal lovers can help turn LA into NKLA.

By adopting from NKLA Pet Adoption Center, people potentially save two lives – the pet who was adopted and the pet that now has a space to be showcased at the center for adoption. “The NKLA Pet Adoption Center is a unique place because it combines the efforts of animal welfare organizations and rescues operating in Los Angeles with the same goal: to end the shelter killing in the city,” said Francis Battista, co-founder of Best Friends Animal Society.

Among the celebrants at the festive outdoor party was Daisy, a pit bull adopted from Karma Rescue at the NKLA Pet Adoption Center on June 2 by Kyndall Stovall of Los Angeles. Stovall, who had recently lost a dog to cancer, first found Daisy online. After meeting Daisy in person, Stovall decided to adopt her on the spot. “Daisy is wonderful. She’s adapted fabulously to her new life. She’s a spoiled princess,” Stovall said. “It’s great what NKLA is doing to help the animals of Los Angeles. People need to stop buying or breeding and adopt pets from shelters.”

Stephanie Westcott of Burbank attended the party with her dog Tucker, whom she adopted at the NKLA Pet Adoption Weekend in April from NKLA coalition partner Hanging with Friends Animal Rescue. “I love what they’re doing here,” Wescott said. “This is a great facility and the fact that they have kennels here for coalition partners to house pets definitely helps rescues save more animals.”

Best Friends Animal Society is the only national animal welfare organization focused exclusively on ending the killing of more than 9,000 cats and dogs per day in America’s shelters.  Last fall, Best Friends launched their new call to action campaign, Save Them All to create awareness for this issue and of the need to adopt and spay/neuter all pets.  Best Friends is working collaboratively in Los Angeles with animal rescue groups, city shelters and passionate individuals who are all dedicated to the mission of making Los Angeles a no-kill city. As part of this mission, Best Friends hosts adoption and fundraising events such as Strut Your Mutt and NKLA Adoption Weekends, runs both the Best Friends Pet Adoption & Spay Neuter Center in Mission Hills and the NKLA Pet Adoption Center in West Los Angeles, and leads the NKLA initiative.