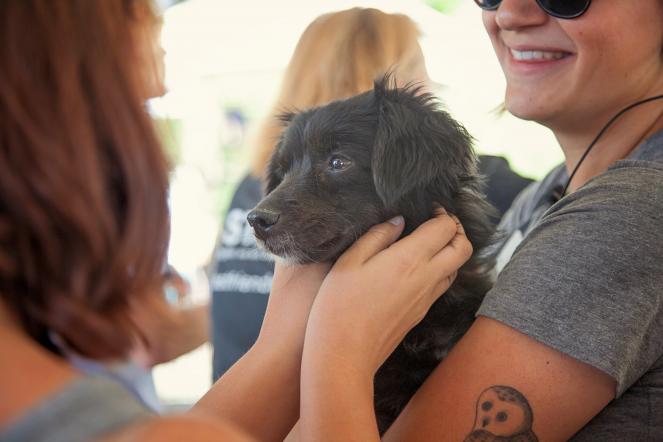 LOS ANGELES – Thanks to Best Friends Animal Society’s NKLA Adoption Weekend held May 2 and 3,  520 cats and dogs (plus one pig and one bunny) were adopted into new homes in just 48 hours. Additionally, over 100 more shelter dogs and cats were welcomed into NKLA Coalition groups and other rescue groups that attended, making this a record-breaking event with more than 620 lives saved.

Held at Page Museum at La Brea Tar Pits, the event is one of Best Friends’ popular semi-annual “super adoptions” at cities across the country. Best Friends is the only national animal welfare organization focused on ending the killing of shelter pets and its NKLA initiative endeavors to make Los Angeles the nation’s largest no-kill city.

Mandy, a kitten from Best Friends Animal Society – Los Angeles, found a home with Erica Gomez of Park La Brea. “We wanted to adopt a new friend. Mandy was playful and we like black cats,” Gomez said. “So many animals need love. If you have love to give, adopting a dog or cat is the best.”

Nikki Raber of La Crescenta adopted a puppy named Rolo from Angel City Pit Bulls. “Originally, we were coming to meet an older dog, but then we saw Rolo. She’s cute, she’s fun and she needed a home,” said Raber.

Pets at the NKLA Adoption Weekend came from a variety of local shelters and rescues, including Los Angeles Animal Services and the Best Friends Pet Adoption & Spay/Neuter Center in Mission Hills, as well as NKLA coalition partners such as Wags N Walks, PugNation, Boston Buddies, Kitt Crusaders and The Cat Cove. Adoption fees started at $50 and all pets were spayed or neutered, vaccinated, and micro-chipped.

Adoption is crucial to end the killing of approximately 9,000 dogs and cats in American shelters each day, according to Marc Peralta, executive director of Best Friends Animal Society – Los Angeles.  “By adopting a pet, you’re really saving two lives – the one you take home and the one who now has a space to come into the shelter,” Peralta said. “We encourage anyone who was unable to attend the NKLA Adoption Weekend to check out the incredible dogs and cats at a local shelter or rescue to find your new best friend.”

Animal loving celebrities ranging from Oscar winner Mira Sorvino to “Galavant” actor Timothy Omundson to “My Cat from Hell” star Jackson Galaxy showed their support for NKLA Adoption Weekend, appearing on stage and ringing the bell at the adoptions area when a pet found a new home.

“One of my proudest moments in my life as an animal advocate was the day my foundation became an NKLA coalition member; it signaled to me that I had become part of something bigger, a movement determined to effect real change for the animal population of LA,” Galaxy said. “Making my presence felt at NKLA Adoption Weekend is just a continuation of that excitement I felt on that day. “

Best Friends Animal Society is the only national animal welfare organization focused exclusively on ending the killing of dogs and cats in America's shelters. A leader in the no-kill movement, Best Friends runs the nation's largest no-kill sanctuary for companion animals, as well as lifesaving programs in collaboration with its nationwide network of members and partners working to Save Them All®. In Los Angeles, Best Friends leads the No-Kill Los Angeles (NKLA) initiative, which is focused on ending the killing of dogs and cats in city shelters by 2017, and operates two centers, the NKLA Pet Adoption Center in West L.A. and the Best Friends Pet Adoption and Spay/Neuter Center in Mission Hills. Since its founding in 1984, Best Friends has helped reduce the number of animals killed in American shelters from 17 million per year to about 4 million.