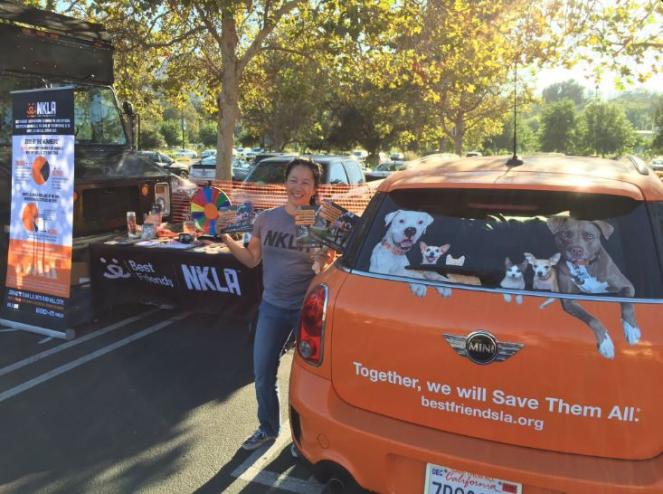 The colorful, custom-wrapped MINI engages a city full of car lovers to Save Them All.
By: Michelle Sathe on November 18, 2016

It can be hard to stand out in a city that loves its cars as much as Los Angeles. That’s not a problem for the Best Friends MINI Cooper Countryman, however.

With its vibrant, orange exterior and colorful collage of happy pets, the MINI is helping Best Friends to spread the message to Save Them All, one mile at a time.

Sheila Kouhkan, Best Friends No-Kill Los Angeles (NKLA) manager, is one of several Best Friends employees who drives the car to outreach and adoption events. As she noted, the MINI is a natural conversation starter.

“One woman rolled down her window and asked me questions while our cars were stopped on the 405,” Sheila says. “She asked me about the work that Best Friends did and said she had been looking for a new companion. I told her about our two L.A. locations and she said she would check them out.”

MINI has been supporting Best Friends’ lifesaving work since 2013 as a Strut Your Mutt sponsor, and as a charitable partner for its MINI Takes the States event (2014) and its Next Sales Event (2014 and 2015).

In 2016, MINI donated vehicles to Best Friends’ program cities in Los Angeles and New York. They provided a fun, visually compelling way to engage with millions of commuters.

“I have driven the MINI around town, often from our adoption center to City Hall,” says Sheila. “I have also driven it from Los Angeles to the Best Friends Animal Sanctuary in Utah. It’s a super fun drive through all kinds of elements: sun, rain, hail, and wind.”

Adoption, outreach and foster teams in Los Angeles also zip around in the colorful MINI for events at such hot spots as Pink’s Hot Dog in Hollywood, The Lincoln in Venice, the Time Out Los Angeles launch party at the Golden Road Brewery in Glendale, and to Eat|See|Hear festivals all over the city.

“We park the MINI right in front and it brings great attention to both the event and our outreach booths,” Sheila says. “People love the car. It piques their interest so much, that they immediately want to speak to us about who we are and what we do. Sometimes people want to take pictures with the MINI, which helps spread the word about our efforts via social media.”

Such local engagement is important as Best Friends’ NKLA initiative reaches its goal of becoming the nation’s largest no-kill city. By working with more than 110 NKLA Coalition partners, including Los Angeles Animal Services, as well as passionate individuals all over the city, NKLA is well on track to reach the 90 percent no-kill benchmark by the end of 2017.

"MINI has a campaign called “Defy Labels,” which is something Best Friends wholeheartedly aligns with, as our work is to help shelter pets to defy the negative labels sometimes placed on them,” Sheila says. “Collaborating with MINI is an innovative way to showcase shelter pets in a really positive, mainstream way. MINI is helping Best Friends reach the masses and we’re really grateful to have them support our efforts to Save Them All here in Los Angeles and across the country.”