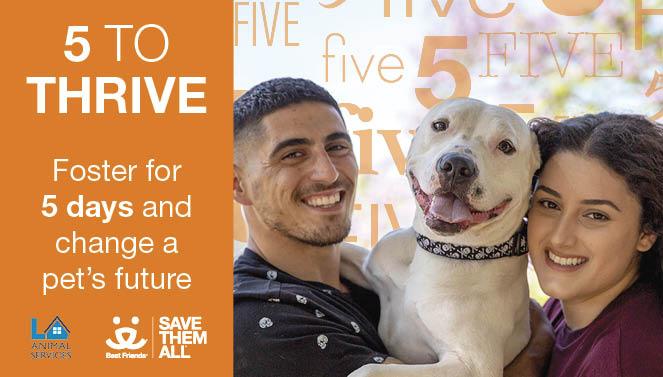 Need a New Year’s Resolution? Give a Shelter Dog “Five to Thrive." Los Angeles Animal Services and Best Friends Animal Society are asking dog lovers to foster throughout the month of January.
By: Michelle Sathe on December 26, 2019

Roary, a 3-year old dog with piercing blue eyes, is making the most of his time at the East Valley Animal Services Center. He loves attention from staff and volunteers, as well as participating in playgroups with other dogs at the shelter.

While many dogs available for adoption at Los Angeles Animal Services (LAAS) are young, healthy, and great with people and other dogs, it can still take a long time for us to find them homes of their own.

“Large breed dogs can be a challenge to adopt in Los Angeles, often due to rental or home owners association restrictions,” said Brenda Barnette, General Manager of LAAS. “We have a lot of fabulous dogs here who end up staying in a kennel for weeks to months or longer. They really need a break from shelter life. Sometimes we find that foster volunteers are key to finding their charge a new home just during walks in the neighborhood.”

That’s why LAAS is partnering with Best Friends Animal Society for “Five to Thrive” this January, asking Los Angeles dog lovers to take home a long-stay resident for five days (or longer).

“Fostering is a great New Year’s resolution, if you want to make a big impact in a short amount of time,” Barnette said. “It’s so rewarding, for both the foster and the dog.”

“It gives dogs a chance to enjoy time outside of a shelter and fosters can give us information on what that dog is like in a home, which can be very valuable in helping us in finding the right adopter in the future,” Pimentel said.Fostering can help shelter dogs in several ways, according to Jennifer Pimentel, executive director of Best Friends Animal Society in Los Angeles.

That was certainly the case for Boo, a pit bull terrier that originally came to Los Angeles Animal Services as a stray before being transferred to Best Friends. Boo was highly stressed in the kennel environment and wasn’t showing well for potential adopters, so he went to a foster home.

Within a short time, Boo started to blossom. His foster discovered that Boo was a sound sleeper who didn’t bark much and loved to kiss and cuddle. The notes from his foster helped Boo find a home shortly thereafter with Meg and Erik Sedrakyan in Los Angeles, where he continues to live happily.

Those kinds of connections are priceless for shelter dogs, as Pimentel illustrated.

“A foster is often the gateway for a dog to find its happy ending, which is a beautiful process to be a part of,” she said. “Of course, if a foster falls in love and wants to adopt the dog, we’re totally fine with that, too. A foster failure is the best kind of failure to be.”

To find out more about “Five to Thrive” and all the participating groups in Los Angeles, visit www.laanimalservices.org or www.bestfriendsla.org.

About Los Angeles Animal Services
Los Angeles Department of Animal Services is one of the largest municipal shelter systems in the United States with six services centers serving approximately 60,000 animals annually and responding to 20,000 emergency calls involving an animal or person in danger. LA Animal Services promotes and protects the health, safety, and welfare of animals and people. Follow us on Facebook, Twitter, and Instagram.

About Best Friends Animal Society
Best Friends Animal Society is a leading national animal welfare organization dedicated to ending the killing of dogs and cats in America's shelters. In addition to running lifesaving programs in partnership with more than 2,700 animal welfare groups across the country, Best Friends has regional centers in New York City, Los Angeles, Atlanta and Salt Lake City, and operates the nation's largest no-kill sanctuary for companion animals. Founded in 1984, Best Friends is a pioneer in the no-kill movement and has helped reduce the number of animals killed in shelters nationwide from an estimated 17 million per year to around 733,000. That means there are still about 2,000 dogs and cats killed every day in shelters, just because they don’t have safe places to call home. We are determined to bring the country to no-kill by the year 2025. Working collaboratively with shelters, rescue groups, other organizations and you, we will end the killing and Save Them All. To check out our community lifesaving dashboard and for more information, visit bestfriends.org.